This morning news broke that the Terminator 2 attraction would be closing at Universal Studios Florida. There was a blurb on the attraction page of the official Universal Orlando website, but was quickly deleted. I was able to grab a screenshot here: 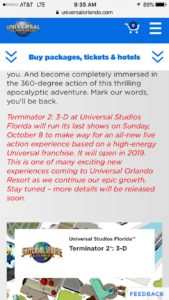 It was officially confirmed when outlets such as Attractions Magazine received an official press release about the closure. What do you think about the closure? Is it about time? What do you think is replacing it? A lot of people are speculating it to be the same type of The Walking Dead attraction they have in Hollywood. In my opinion, that doesn’t fit the description of a “high-energy Universal franchise”. I’m leaning towards a Secret Life of Pets show. Granted there’s only 1 movie part of that franchise right now, but rumors suggest a sequel is in the works. Also some folks are suggesting it might be some sort of Pitch Perfect attraction. All we can do right now is speculate. Let me know what you think! Until then, catchy catchphrase!