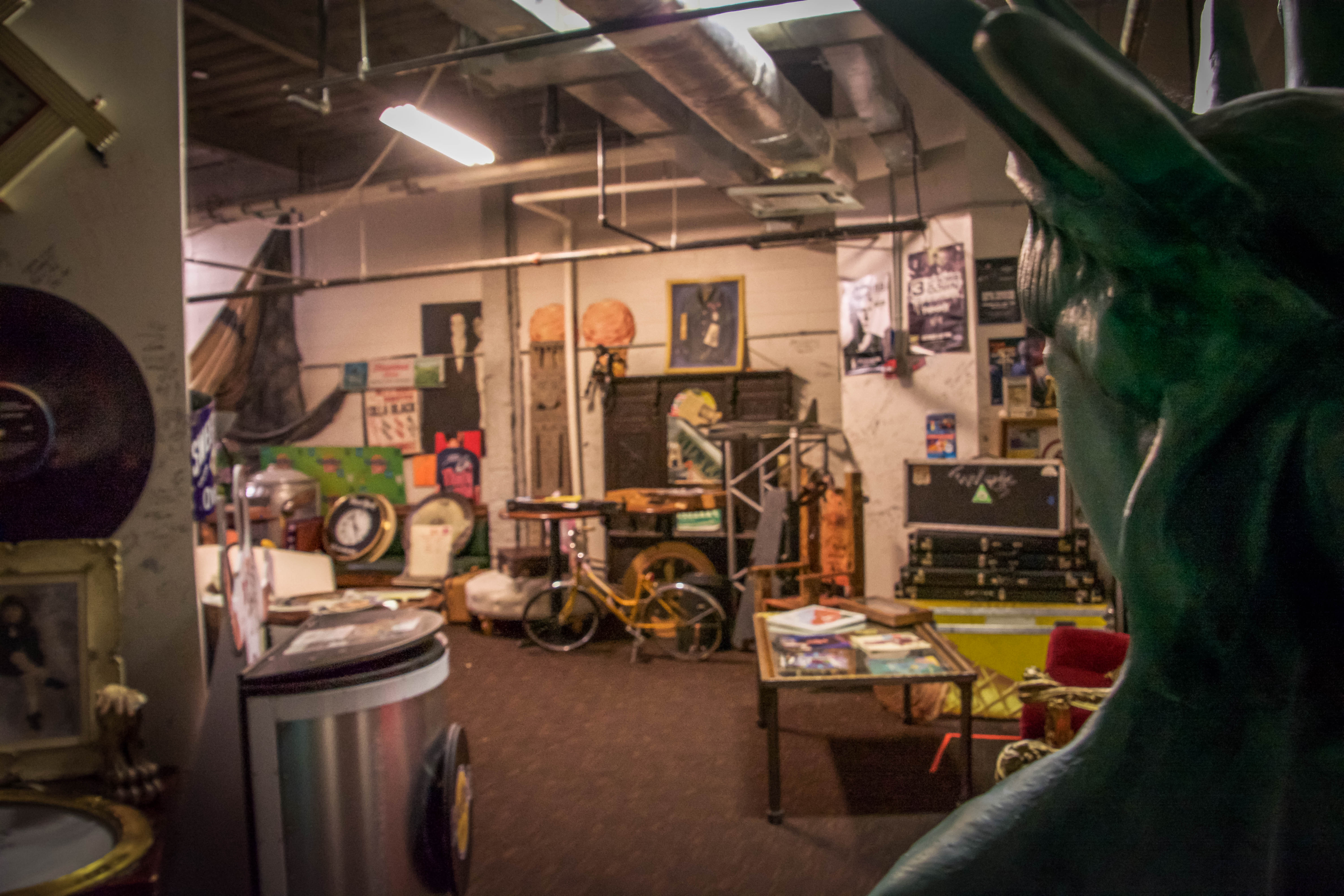 Some of you may already know, but I worked at the Hard Rock Cafe here in Orlando. For a long time. A really long time. I can tell you just about all there is to know about the brand and this particular location. The last couple years of my tenure at the old HRC, I was what they called a "VIBE Host". The VIBE Host is the coolest job in the whole building. I'll go into greater detail of all the duties of the VIBE in future blog posts, but today I'm going to focus on just one part of that VIBE life. Giving tours. The VIBE would walk groups of guests around the building telling stories about the "stuff" on the walls. Mostly in the dining areas, but there were also parts of the tours that took you behind the scenes.

Hard Rock Orlando is the home of the largest collection of memorabilia the company has to offer in a single building. Meticulously placed on the walls throughout the cafe and backstage, each piece of "memo" has its own story to tell. And it was up to the VIBE Host to bring these stories to life on the tour. Now let me tell you what my most favorite part about giving the tour was...

It was such an amazing feeling to be in the middle of telling a story to a captivated audience and then turning a literal corner or opening a door to reveal something they weren't expecting. This was something I looked forward to each tour. But today I'm going to tell you about what is revealed behind this door. It looks like a seemingly normal looking door to maybe a broom closet or some sort of dry storage, right? Well, as I'd approach this door I would tease the group and tell them we really shouldn't be in this area. I was breaking all kinds of rules and regulations. Only employees were allowed in this area. But behind this door, we will find things they never thought they'd be this close to. 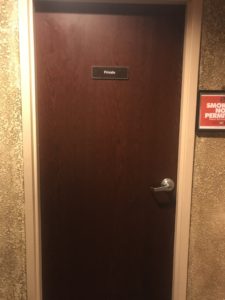 The look of the door itself has changed a couple times over the years. It went from being completely unmarked to having a "private" sign on it. The lock itself went from being a traditional key to an electronic key and lock system. I'd pretend to struggle with the door for a moment before gently kicking it open and the reveal has been made...

"You've gotta be f&%king kidding me!" was also a popular one.

Those were just a few of the more popular responses to the reveal. Entering the room I would tell my guests, "This is The Attic. It is just like the attic that would be at your grandma and grandpa's house, but if they were rock stars." Unlike in the cafe, here you might find memorabilia just leaning against the wall on the floor, sometimes things were unframed or  just chillin' on a piece of furniture. Things looked like they were just tossed around and left behind. Which added to the charm of the room in my opinion. And the coolest thing was, you were able to handle it all...with care! But more about the "stuff" in a minute.

Other than physical pieces of rock and roll history, you'd wander around the room and start to notice "graffiti" on the walls. Look a little closer and you'll realize they're actually signatures. And then you'd recognize some of these names and you're literally standing where they once stood before taking the stage at Hard Rock Live Orlando. It became something of a tradition for the bands to sign the wall in The Attic before or after they played a show. I have left a couple of marks on the walls myself. It should be noted that Hard Rock's Twitter and Instagram had different handles at the time I tagged the wall with them. 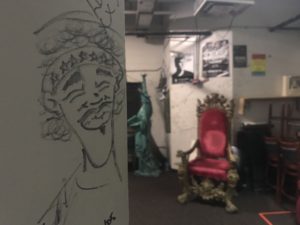 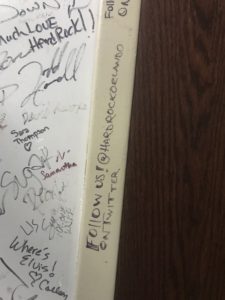 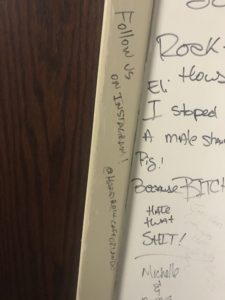 In the early 2000s, the room was used as a green room of sorts for the show "Live at the Hard Rock" for MTV. Bands like Simple Plan, Good Charlotte, Fall Out Boy and more used the room for interviews and meet and greets prior to the show. When that production ended, the room was still used occasionally for things like that, but not that often.

There were several pieces of memorabilia that called The Attic their permanent residence. A throne that was once owned by Yul Brynner (that occasionally left The Attic to be used on stage in Hard Rock Live for various shows), a dress once owned by Cyndi Lauper, an electric chair owned by the rock group Disturbed, a yellow Huffy bicycle that was a promotional item and inspired by The Beatles' Yellow Submarine, an old jukebox that once played 88rpm records, and an old recording booth similar to the one that Elvis used as a child to make a record for his momma's birthday. There were many other things that would get shuffled in and out over the years so it gave The Attic that "never see the same thing twice" appeal. 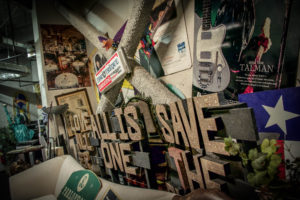 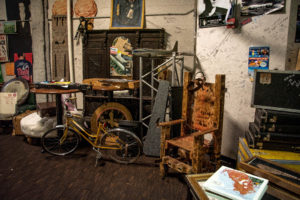 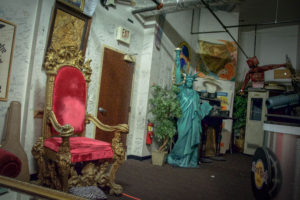 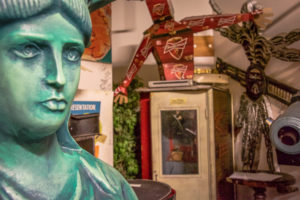 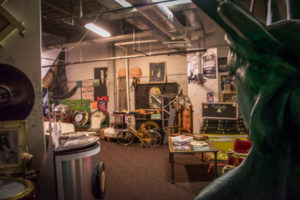 I also would admittedly use The Attic as somewhat of a quiet space. Whenever I needed to get away from the hustle and bustle of the busy Cafe, I would seek refuge here. Charge my phone, catch up on social media (also part of the VIBE Host duties), and just basically use it as a hideout. It also served as something of a home to Rocky Bearboa (more on him in a future VIBE related post). There were so many cool things about and inside The Attic, that it is very possible I accidentally left out a couple in this post and I apologize.

But unfortunately, there is a reason why I am writing this bittersweet post about the room. You may have noticed that a couple times I referred to The Attic in the past tense. And that is because it is no longer being used as a stop on the VIBE tour. For reasons I'm not at liberty to say,  The Attic has closed forever. All the memorabilia has been taken out, and to my knowledge, the walls have been covered up (not painted). When I heard the rumor this was going to happen, I went to the Hard Rock to get some video footage of it one last time. And ironically, without any tweets or fanfare, they closed the room up the very next day. The video below is the one I took.

I will miss The Attic for a multitude of reasons. I feel it didn't get the closure it deserved, but I feel lucky that I was able to share it with so many. Did you have the chance to see it? I'd love to hear about your experience! Look out for more VIBE Host related posts in the future. If you have any questions about the gig that I'll answer in an upcoming blog, email me at mikey@magiccitymayhem.com